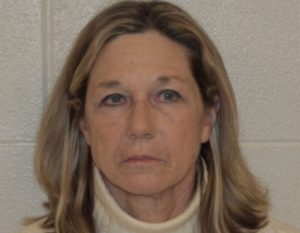 years in prison for stealing $53 million from the city, the U.S. Marshals Service is touting success in selling more of her personal belongings. The sale of clothing and accessories raised more than $46,000.

The Marshal’s Service says the publicity about the case and the two-week online bidding process provided a world-wide opportunity for public participation.

Prosecutors on Tuesday dropped all remaining charges against a former city comptroller who recently began serving a lengthy federal prison sentence for stealing nearly $54 million from her northern Illinois community.
Lee County State’s Attorney Anna Sacco-Miller dropped the 60 state counts of felony theft that remained against former Dixon comptroller Rita Crundwell. The prosecutor explained that the state case would have cost taxpayers more money and would not have resulted in additional prison time because any sentence would have to be concurrent with the federal punishment.
Crundwell, who was Dixon’s longtime bookkeeper, admitted in federal court in November that she stashed public money in a secret bank account for about two decades and used it to fund her lavish lifestyle and her renowned horse-breeding operation. The money went toward everything from expensive horse trailers and luxury motor homes to jewelry and birthday bashes in Venice Beach, Fla. It ranks as one of the worst abuses of public trust in the state’s corruption-rich history.
Because Crundwell had sole control of the city’s bookkeeping, the theft went unnoticed for years, even as the city’s financial shape suffered, with streets and equipment falling into disrepair and city employees going without raises. There wasn’t even enough money to mow the grass at the cemetery.
The scheme unraveled only when a colleague who filled in for her when she went on an extended vacation became suspicious.
Crundwell was sentenced in federal court in February to nearly 20 years in prison. Her attorney in the state case, Bob Thompson, had argued that subjecting her to another trial would amount to double jeopardy.
The state case covered only the period from January 2010 until Crundwell’s arrest in April 2012, during which time she was accused of stealing about $11 million.
Dixon Mayor Jim Burke said he had wanted to see Crundwell back in court, but that he agreed with the state’s attorney’s reasoning.
“She probably made a wise decision in just dropping the whole thing rather than spending money just to get some kind of emotional satisfaction out of the fact that we’re trying to nail Rita’s hide to the door one more time,” Burke said.
Sacco-Miller said the state charges could still be re-filed if Crundwell’s appeal of her federal sentence is successful.
The 60-year-old Crundwell is jailed in Boone County pending her assignment to a federal prison. She did not appear at Tuesday’s hearing.
Copyright Associated Press

Lawmakers overwhelmingly passed three bills in the house. But there are concerns at least some of the legislation just adds more government to municipalities that already have oversight in place.

“That we have effective and strong prosecution at our disposal on the state level to make sure we can effectively deter this from happening and prosecute those who do it,” says Representative Tom Demmer.

He is a Dixon native helped introduce what’s being called the Anti-corruption Legislation. It was created after Rita Crundwell pled guilty to stealing $53 million as Dixon’s comptroller. One bill allows for forgery charges to be brought if an invoice or a receipt is counterfeited. The second establishes higher penalties for theft or misapplication of public funds.

The third creates safeguards by making all counties and municipalities create a finance and audit committee which includes members of the government and the public. Winnebago County already has something like it, its called the finance committee.

“In some ways it would be redundant,” says Bill Crowley, Winnebago County auditor.

That’s because not only is each department audited and brought before that county committee. They have also gone a step farther.

“We have the checkbook online, you can go on our website and you can actually see the payments that we make to various vendors in real time,” says Crowley.

The bills are currently in the Illinois Senate. It still has to pass out of committee but senators should vote on the bills in May.

WASHINGTON – The U.S. Marshals Service is selling 351 lots of jewelry, including that of convicted former comptroller of Dixon, Ill., Rita Crundwell, and other fine jewelry, watches, gold bullion and coins via a live and Web simulcast auction Saturday at 10 a.m. CST in Fort Worth, Texas, and at www.txauction.com.

The items being sold were seized in federal court cases nationwide and have been forfeited to the government. Lots 150-298 are from the Crundwell case. The U.S. Marshals Service consolidates pieces from cases nationwide and holds a large auction several times a year. Proceeds generated from the auctions are used to compensate victims of crimes and supplement law enforcement programs.

February 12, 2013 ( ROCKFORD, Ill.) — At least half a dozen public officials are expected to make victim statements at this week’s sentencing of a small-town Illinois bookkeeper who stole $53 million in public funds.

A government filing Tuesday says Dixon Mayor James Burke is among those who will describe how Rita Crundwell’s crimes devastated his northern Illinois community.
As the city’s longtime comptroller, Crundwell used the stolen money to fund her nationally renowned horse-breeding operation and luxurious tastes.

She’s scheduled to be sentenced Thursday in Rockford. The most the 60-year-old could face is 20 years in prison after pleading guilty in November to a felony count of wire fraud. A state case against her is still pending.

Prosecutors contend her case is one of the most egregious abuses of public trust ever in Illinois.

February 12, 2013 ( ROCKFORD, Ill.) — At least half a dozen public officials are expected to make victim statements at this week’s sentencing of a small-town Illinois bookkeeper who stole $53 million in public funds.

PHOTOS: Inside Rita Crundwell homes up for auction
View all 16 photos
A government filing Tuesday says Dixon Mayor James Burke is among those who will describe how Rita Crundwell’s crimes devastated his northern Illinois community.
As the city’s longtime comptroller, Crundwell used the stolen money to fund her nationally renowned horse-breeding operation and luxurious tastes.

She’s scheduled to be sentenced Thursday in Rockford. The most the 60-year-old could face is 20 years in prison after pleading guilty in November to a felony count of wire fraud. A state case against her is still pending.

Prosecutors contend her case is one of the most egregious abuses of public trust ever in Illinois.

These pictures are a small sample of the 228 pieces in the Crundwell jewelry collection that will be sold at a U.S. Marshals Service live auction next month.

Where: The auction will take place at the Fort Worth Convention Center, 1201 Houston Street, Fort Worth, Texas. The sale will also be simulcast so participants may bid over the internet during the auction.

Detailed information, to include photographs and descriptions of the complete inventory, will soon be posted at www.txauction.com. 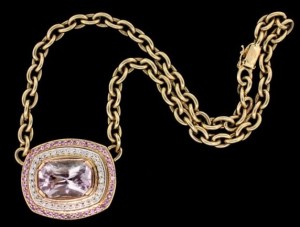 (The auctioneer manages the sale of all U.S. Marshals Service seized and forfeited jewelry so you may see other unrelated sales posted.)

DIXON – CliftonLarsonAllen advised city officials in writing more than once that there was a problem with its lack of segregation of duties at City Hall, the company says.

The city has amended its lawsuit against CliftonLarsonAllen, one of the largest financial consultants in the United States, saying the company should have detected the theft of nearly $54 million by former comptroller Rita Crundwell.

“We believe we met our obligation to provide the city’s officials with information about its finances,” the company said in a statement to Sauk Valley Media.

Court documents revealed Crundwell used 179 phony invoices to steal city funds. The invoices lacked key information, such as the agency’s emblem or logo and a contact name and number of an employee who could be reached for questions.

While those and other examples should have raised suspicion, no evaluation or investigation was made of the phony documents by CliftonLarsonAllen for the past 21 years, the city government says in its suit.

The company also violated a federal statute by conducting an audit and not being an independent firm, the suit says. In other words, it was performing an audit on its own financial statements, since it compiled payroll and other city finances.

CliftonLarsonAllen denies it conducted audits for the city since April 2006.

Instead, their company spokeswoman says the firm was performing a compilation.

“We provided the city audit services through April 30, 2005, and compilation services since April 30, 2006,” Jennifer Dirks said in a statement sent to SVM over the weekend.

“The contracts executed with the city and the reports issued on the financial statements of the city clearly described the services we were contracted to perform and did perform. The type of audits our firm performed through 2005 and the compilation services provided since 2006 did not require the sort of detailed testing needed to uncover the fraud or a forensic investigation to determine if the city’s comptroller Rita Crundwell was fabricating invoices.”

Documents dating back to 2006 from CliftonLarsonAllen on the city’s website refer to its reports as “compilation reports.”

Mayor Jim Burke declined to answer questions in regard to the city’s relationship with CliftonLarsonAllen, stating the city’s attorney Devon Bruce of Power, Rogers and Smith advised him not to make statements while litigation is pending.

According to the amended lawsuit, the firm determined it was not “independent” in 2005, according to nationally recognized accounting standards, which prevented it from performing the audit by federal statute.

The firm reached out to Janis Card Co., which had only two certified public accountants, little or no experience in performing municipal audits, and lacked the resources to perform the city’s audits.

A partner in the firm told Janis Card Co. that in return for signing the audit for the city, CliftonLarsonAllen would conduct and prepare the audit.

Further, CliftonLarsonAllen told the city it was doing only a compilation, meaning it provided financial statements for the audit, yet referred to their work as an “audit” in several emails to city supervisors that are listed in court documents.

The company said it will respond to these claims in proceedings.

“We are confident in the integrity and professionalism of the partners and employees of our firm,” the statement said.

“As accountants and financial services professionals dedicated to the highest level of client service, we take the fraud perpetrated by Rita Crundwell very seriously. We have been working with the City as it seeks to discover all of the facts that will describe what has happened in this case.

“CliftonLarsonAllen is one of the most respected firms in the country and we are committed to continuously enhancing our operations, performance, and practices to fulfill our responsibility to our clients.”

According to court documents, Crundwell wrote more than 179 fake invoices from the Illinois Department of Transportation over the past ten years. Totaling over $44 million.

The invoices did not include an official IDOT emblem nor any contact information.

Crundwell then independently wrote and signed all the checks, despite normal process calling for three signatures.

Despite all the red flags and phony documents annual audits failed to catch what Crundwell was doing.

Which has led Dixon officials to file a lawsuit against two accounting firms in excess of $53 million.

The next hearing in that case is scheduled in march